Astronomers have found that dark matter does not slow down when colliding with each other.

Researchers say this finding narrows down the options for what this mysterious substance might be.  Because dark matter does not reflect, absorb, or emit light, it can only be traced indirectly, such as by measuring how it warps space through gravitational lensing.

NASA’s Hubble Space Telescope and Chandra X-ray Observatory were used to study how dark matter in clusters of galaxies behaves when the clusters collide. Hubble was used to map the post-collision distribution of stars and dark matter, which was traced through its gravitational lensing effects on background light. Chandra was used to see the X-ray emission from the colliding gas. The results will be published in the journal Science on March 27.

“Dark matter is an enigma we have long sought to unravel,” said John Grunsfeld, assistant administrator of NASA’s Science Mission Directorate in Washington. “With the combined capabilities of these great observatories, both in extended mission, we are ever closer to understanding this cosmic phenomenon.”

To learn more about dark matter, researchers can study it in a way similar to experiments on visible matter — by watching what happens when it bumps into celestial objects. An excellent natural laboratory for this analysis can be found in collisions between galaxy clusters.

Galaxy clusters are made of three main ingredients: galaxies, clouds of gas, and dark matter. During collisions, the clouds of gas enveloping the galaxies crash into each other and slow down or stop. The galaxies are much less affected by the drag from the gas and, because of the huge gaps between the stars within them, do not have a slowing effect on each other.

“We know how gas and galaxies react to these cosmic crashes and where they emerge from the wreckage. Comparing how dark matter behaves can help us to narrow down what it actually is,” explained David Harvey of the École Polytechnique Fédérale de Lausanne, Switzerland, lead author of the new study.

Harvey and his team used data from Hubble and Chandra to study 72 large cluster collisions. The collisions happened at different times, and are seen from different angles — some from the side, and others head-on.

The leading theory is that dark matter particles spread throughout the galaxy clusters do not frequently bump into each other. The reason the dark matter doesn’t slow down is because not only does it not interact with visible particles, it also infrequently interacts with other dark matter. The team has measured this “self-interaction” and found it occurs even less frequently than previously thought.

“A previous study had seen similar behavior in the Bullet Cluster,” said team member Richard Massey of Durham University, U.K. “But it’s difficult to interpret what you’re seeing if you have just one example. Each collision takes hundreds of millions of years, so in a human lifetime we only get to see one freeze-frame from a single camera angle. Now that we have studied so many more collisions, we can start to piece together the full movie and better understand what is going on.”

“It is unclear how much we expect dark matter to interact with itself because dark matter is already going against everything we know, said Harvey. “We know from previous observations that it must interact with itself reasonably weakly, however this study has now placed it below that of two protons interacting with one another — which is one theory for dark matter.” Harvey said that the results suggest that dark matter is unlikely to be only a kind of dark proton. If dark matter scattered like protons do with one another (electrostatically) it would have been detected. “This challenges the idea that there exists ‘dark photons,’ the dark matter equivalent of photons,” he said.

To further increase the number of collisions that can be studied, the team is also looking to study collisions involving individual galaxies, which are much more common.

“There are still several viable candidates for dark matter, so the game is not over, but we are getting nearer to an answer,” concludes Harvey. “These ‘astronomically large’ particle colliders are finally letting us glimpse the dark world all around us but just out of reach.”

Scientists have long known that dark matter is out there, silently orchestrating the universe’s movement and structure. But what exactly is dark matter made of? And what does a dark matter particle look like? That remains a mystery, with experiment after experiment coming up empty handed in the quest to detect these elusive particles.

With some luck, that may be about to change. With ten times the sensitivity of previous detectors, three recently funded dark matter experiments have scientists crossing their fingers that they may finally glimpse these long-sought particles. In recent conversations with The Kavli Foundation, scientists working on these new experiments expressed hope that they would catch dark matter, but also agreed that, in the end, their success or failure is up to nature to decide.

“Nature is being coy,” said Enectali Figueroa-Feliciano, an associate professor of physics at the MIT Kavli Institute for Astrophysics and Space Research who works on one of the three new experiments. “There’s something we just don’t understand about the internal structure of how the universe works. When theorists write down all the ways dark matter might interact with our particles, they find, for the simplest models, that we should have seen it already. So even though we haven’t found it yet, there’s a message there, one that we’re trying to decode now.”

The first of the new experiments, called the Axion Dark Matter eXperiment, searches for a theoretical type of dark matter particle called the axion. ADMX seeks evidence of this extremely lightweight particle converting into a photon in the experiment’s high magnetic field. By slowly varying the magnetic field, the detector hunts for one axion mass at a time.

“We’ve demonstrated that we have the tools necessary to see axions,” said Gray Rybka, research assistant professor of physics at the University of Washington who co-leads the ADMX Gen 2 experiment. “With Gen2, we’re buying a very, very powerful refrigerator that will arrive very shortly. Once it arrives, we’ll be able to scan very, very quickly and we feel we’ll have a much better chance of finding axions – if they’re out there.”

The two other new experiments look for a different type of theoretical dark matter called the WIMP. Short for Weakly Interacting Massive Particle, the WIMP interacts with our world very weakly and very rarely. The Large Underground Xenon, or LUX, experiment, which began in 2009, is now getting an upgrade to increase its sensitivity to heavier WIMPs. Meanwhile, the Super Cryogenic Dark Matter Search collaboration, which has looked for the signal of a lightweight WIMP barreling through its detector since 2013, is in the process of finalizing the design for a new experiment to be located in Canada.

Rybka agreed, but added the more optimistic perspective that it’s also possible that all three experiments will find dark matter. “There’s nothing that would require dark matter to be made of just one type of particle except us hoping that it’s that simple,” he said. “Dark matter could be one-third axions, one-third heavy WIMPs and one-third light WIMPs. That would be perfectly allowable from everything we’ve seen.”

Yet the nugget of gold for which all three experiments search is a very valuable one. And even though the search is difficult, all three scientists agreed that it’s worthwhile because glimpsing dark matter would reveal insight into a large portion of the universe.

“We’re all looking and somewhere, maybe even now, there’s a little bit of data that will cause someone to have an ‘Ah ha!’ moment,” said Harry Nelson, professor of physics at the University of California, Santa Barbara and science lead for the LUX upgrade, called LUX-ZEPLIN. “This idea that there’s something out there that we can’t sense yet is one of those things that sends chills down my spine.”

Dark matter half what we thought, say scientists (PDF)

Among the artian hills: Curiosity Rover peers at rocks of Mount Sharp

The cosmic signal that might have changed human civilization

What a difference a  neutron makes

Scientists at Harvard crush, freeze and light their ‘soft’ robot on fire and it still wriggles away

Artificial cells created that change shape and move on their own 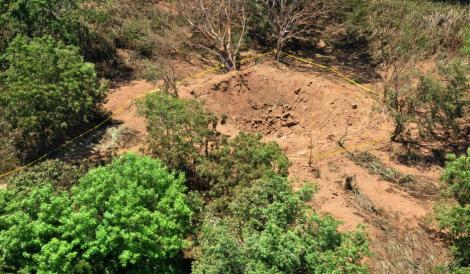 Pluto and the other dwarf planets could have astrobiological potential

Vision correcting displays could spell the end of wearing glasses